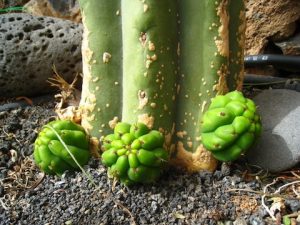 The legendary sacred cactus of South America was known by many names to the native peoples of the coast and sierra of Ecuador, Peru and Bolivia – wachuma, huachuma, achuma, chuma, cardo, cuchuma, huando, gigantón, hermoso and aguacolla. Today it is best known in Peru by it’s post-colonial name San Pedro, a reference to the Christian saint who holds the keys to the Gates of Heaven.

San Pedro or wachuma is a teacher plant and, like Ayahuasca is a part of ancestral medicine plant family. Being of Andean origin, San Pedro has been used for thousands of years in Andean spiritual traditions through by South America’s mountain region priests and medicine men as a part of their spiritual practice.

The experience with San Pedro carries a quality of smooth reconnection with one’s body and mind, it feels like getting rid of a veil and reconnecting with our original state of consciousness. Rather than being carried away into psychedelic realms, its very common to have a sense of returning to primordial state, where everything is included and seen for what it is. The experience with San Pedro unfolds in a full presence with all senses, processes in nature, passing of time. Through being present in oneself and seeing the human condition, a person is able to know directly his place in this reality, including it as a part of a much larger journey, that surpasses space and time. The teachings of San Pedro as master medicine are said to be like the energy of sun, gentle and, at the same time firm and uncompromising, representing the masculine aspect of a master plant. 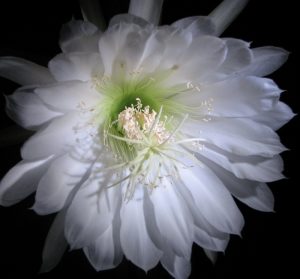 Huachuma (San Pedro) has a special symbolism in Peruvian curanderismo (traditional folk healing) for a reason.  “San Pedro is always in tune with the powers of animals, of strong personages or serious beings, of beings that have supernatural power…”

The Huachuma (San Pedro) cactus (Trichocereus pachanoi, T. peruvianus and other species) represents perhaps longest-used of the sacred holistic healing plants of South America.  The ceremonial use of Huachuma (San Pedro) for healing, magical and divining purposes has been a continuous tradition in Peru for well over 3,000 years and continues today, largely in syncretic post-colonial “San Pedro” mesa modalities. The oldest archaeological evidence, the classic Chavín stone carving of the huachumero shaman in the Old Temple of Universal Consciousness at Chavín de Huantar in northern Perú, goes back to 1500 b.c. if not older.  Old Chavín textiles depict the cactus with jaguar and hummingbird figures. Peruvian ceramics made between 1000 and 700 B.C. show the plant in association with the deer.

Trichocereus pachanoi and T. peruvianus are tall columnar cacti sometimes reaching over 8 meters in height. Over thirty species are described although the taxonomy is confusing and there is disagreement concerning the identity of somel species. The species most commonly associated with medicinal use are Trichocereus pachanoi, T.peruvianus which are native to Perú, and T.bridgesii which is native to Bolivia.

Principal active biochemicals: the phenelthylamine alkaloid mescaline is present, primarily concentrated in the green outer skin of the cactus.

Over thirty other alkaloids have been isolated including:
tyramine, hordenine, 3-methoxytyramine, anhalaninine, anhalonidine, 3,4-dimethoxyphenethylamine, 3,4-dimethoxy-4-hydroxy-B-phenethylamine, and ,5-dimethoxy-4-hydroxy-B-phenethylamine.
Some of these are known sympathomimetics. Others have no apparent effects when ingested by themselves.
The combination with the mescaline and other active compounds has a synergistic relationship which greatly influences the qualitative aspects of the experience.  It is also possible that some compounds in the plant may act as a mild MAO inhibitor thus rendering a person vulnerable to some of the aforementioned amines which would ordinarily be metabolized before they could take effect.

At least one of these alkaloids is an effective antibiotic and others may possess medicinal and/or psychoactive properties.  The Huachuma experience is certainly greater than the sum of it’s parts, and it is gross misunderstanding to simply charactize it as a “mescaline” experience.  The plant has a powerful and benevolent spirit and is MUCH more.

Cactus of the Four Winds

“The plant first produces drowsiness or a dreamy state and a feeling of lethargy, a slight dizziness, then a great ‘vision’, a clearing of all the faculties. It produces a light numbness in the body and afterward a tranquility. And then comes detachment, a type of visual force, inclusive of all the senses including the sixth sense, the telepathic sense of transmitting oneself across time and matter … like a kind of removal of one’s thought to a distant dimension.” 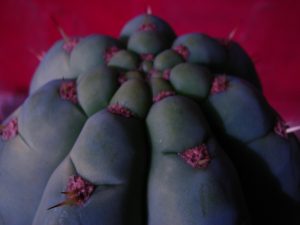 Huachuma is the catalyst that activates all the complex forces at work in a curanderismo healing ceremony, especially the visionary and divinatory powers of the shaman, who can make himself the owner of another’s identity. Ecstatic magical flight is characteristic of the Huachuma experience. “One is transported across time, matter, and distance in a rapid and safe fashion…”

The goal of the maestro curandero is to make his patient “bloom” during the ceremony, to make his subconscious “open like a flower,” even like the night-blooming Huachuma itself.

Not only is San Pedro still used in shamanic trances and healing sessions throughout the northern coast and Andes but it is also used increasingly to combat contemporary problems such as alcoholism and other addictions. Like the peyote cactus used widely in some parts of Mexico and North America, mainly by native people, huachuma is also a holistic medicine which can cure alcoholism and other addictive or behavioral problems.  This parallel is noteworthy because since both cacti contain mescaline which is known to be a highy revelatory and transformative agent of higher consciousness.  Both are good medicine indeed, and are here for everyone who needs them and is called to them.

Beliefs offer the impression of security and shelter from the mystery of being. Beliefs are a form of sleep.